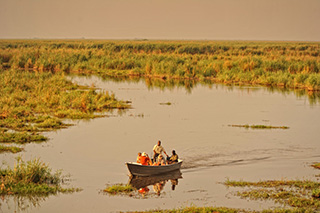 This Okavango And Chobe Explorer safari will give you opportunities to explore the finest Botswana safari areas of the Okavango Delta (Shinde), Khwai community area (at the intersection of Moremi Game Reserve and Chobe National Park) and the Linyanti Swamps (North of Chobe enclave). All in authentic, exclusive safari tented camps.

Each Park and area you visit has a unique ecosystem offering you great diversity. From our experience spending three nights in each area gives you the opportunity for quality game viewing.

Khwai Private Concession
Khwai is a community run private concession, which forms the eastern border of the Moremi Game Reserve along the river Khwai. This river is the sole source of water for miles around attracting wildlife from afar. As this is a community run project all proceeds collected from tourism goes directly to help fund the Khwai Community Trust.

Chobe National Park
The Chobe National Park is 11,000 square kilometers, making it Botswana's third largest wildlife area. The Chobe River area is where your camp will be situated and is renowned for its large animal populations.

On arrival into Maun, you will be met and transferred by private charter to Shinde camp where you will spend your first three nights.

Nestled on a lush palm island in the heart of the northern Okavango Delta, Shinde is an intimate camp located on the edge of Shinde lagoon, teeming with animal and birdlife. The main camp's unique tree house made of a multi-tiered raised dining/lounge area under canvas, set amongst the shade of ebony and mangosteen, complements the atmosphere of this original safari camp.

Shinde offers a diverse range of activities, having the ideal location affording both water and land activities throughout the year. Powerboats or mekoro provide a chance to experience the incredible bird, plant and reptile species found in the aquatic habitat of the Delta. Game drives are conducted in comfortable, specially designed vehicles together with a personal guide. Guided walks are also available for the more adventurous. For the fly fishing enthusiast, Shinde offers fishing for a variety of species such as tilapia and tiger fish.

Khwai is a private community run concession on the eastern border of the Moremi Game Reserve along the river Khwai. The Khwai River forms a boundary between the reserve and the community area. The river is the sole source of water for miles around attracting wildlife from afar. As this is community run all proceeds from tourism go directly to help local people and local projects through the Khwai Community Trust. This being a community concession, guests are privy to night drives which are usually not permitted in the National Parks or Game Reserve. Exploring after dark with spotlights offers you an opportunity to experience some of the nocturnal animals that are rarely encountered during the day.

There is the added opportunity to explore the surrounding wilderness on foot and enjoy an up close personal encounter with the varied flora and fauna in the area. The vegetation here is quite different from the Western section of Moremi where great stands of leadwood and mopane woodlands occur in close proximity to open grasslands and the Khwai River.

The camp has the romance of a mobile camp, where there are no permanent structures and everything can be removed to leave the wilderness exactly as we found it, having little or no impact on the environment. You will enjoy spacious and comfortable tented accommodation, with beds and private en-suite bathrooms in this remote wilderness area. This camp is furnished with bucket showers under the stars. Your toilet is also ensuite and is a flush toilet for your convenience.

Wildlife encountered include lion, cheetah, leopard, wild dog, as well as a multitude of other animals, including elephant, buffalo, zebra, hippo and giraffe to name a few.

The area is best known for its large populations of Elephant and buffalo that congregate in vast numbers especially during the dry season. Lion, sable, roan, leopard, wild dog, and a number of the plains game can be enjoyed at Linyanti. The rare and elusive sitatunga antelope, red lechwe, hippo and crocodile can be found in the surrounding marshes. The Linyanti Swamps are one of the most attractive areas in the park as it is the only source of water in the dry months where a lot of the wildlife moves to, boasting a great diversity of game and a restful atmosphere. The area's relative remoteness makes it a favored wild safari destination and one of the best sought after areas in Northern Botswana. The area also offers spectacular birding all year round and is best known for its enormous herds of elephants which move down to the Linyanti River at the start of the winter months and only move back inland once the main rains arrive.

After a delightful activity at Linyanti Bush Camp, you will game drive through to the Saile airstrip for your charter flight to Maun or Kasane airports, for your onward travel arrangements. 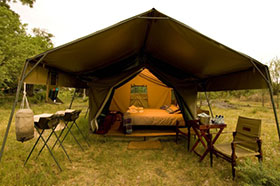 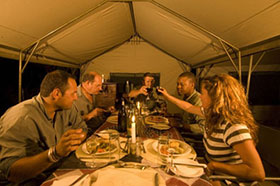 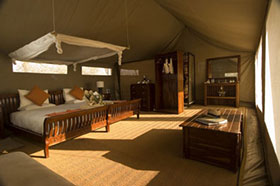 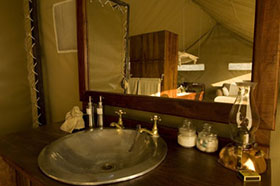