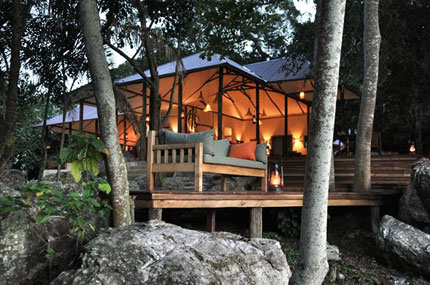 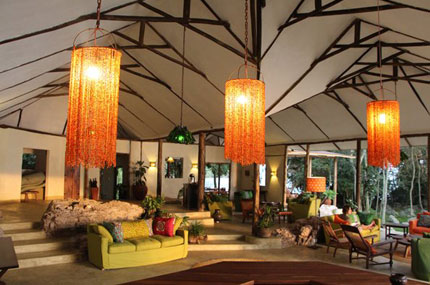 Accessible by air from Serengeti or Arusha, Rubondo Island Tented Camp on Rubondo Island on Lake Victoria offers the classic off-the-beaten-path experience in Tanzania. The camp is a paradise for naturalists and provides a superb base from which to explore Rubondo Island National Park, consisting of 12 islands on Lake Victoria and covering a total area of 456.8 km2 at 1,134 m above sea level. The main island, Rubondo, is 26 km long and 3-10 km across. Rubondo Island became a game reserve in 1965, to provide a sanctuary for animals threatened with extermination, due to the efforts of Prof. Bernhard Grzimek of the Frankfurt Zoological Society (FZS).

At the time, chimpanzees, elephants, giraffes, antelopes, suni, black-and-white colobuses, and black rhinos were released on the islands. Native mammals include bushbucks, sitatungas, hippos, vervet monkeys, genets, otters, cane rats, and mongooses (6). The range of habitat, from savannah and open woodland to dense forest and papyrus swamps, also makes Rubondo a bird watchers paradise. The island has an abundance of herons, storks, ibis, egrets, cormorants, kingfishers, bee-eaters, and flycatchers and has possibly the highest density of fish eagles anywhere in the world. Rubondo and the other 11 islands were give National Park status in 1977.

Besides daily trips on foot or by boat to view the resident primates, wildlife, bird species and butterflies, you may also try your luck at fishing for Nile Perch - the current record catch stands at 108 kg! 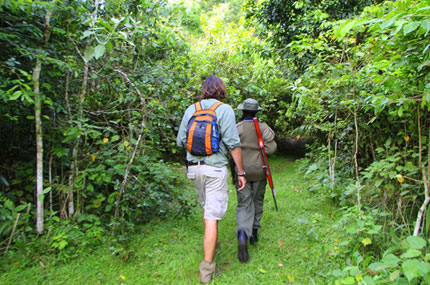 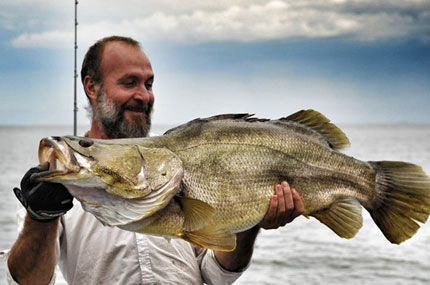 Accommodation is under thatched roofs in very comfortable tents with double- or twin-beds. Each of the tent has a private terrace overlooking Lake Victoria and the exquisite sunsets. The tents have windows on all sides and proper wooden entrance doors. A spacious en suite bathroom and dressing room has been constructed for each tent and immense care has been taken to use local building materials: stone slates for the floors, palm trees for the roof framework and papyrus mats for thatching.

An outcrop of rocks amidst indigenous trees provides the perfect setting for the restaurant and bar, offering a splendid view of the lake and bay. A swimming pool is located conveniently close to the bar, among the palm trees. During the day the lake is usually calm, but when the wind picks up in the late afternoon the waves roll in, carrying in the singing sounds of the sea. Bathing in the lake is possible close to the shore - the resident hippos usually keep a safe distance! A small library and several games are available to the guests.

The delightful Rubondo Island Camp will undoubtedly provide an interesting twist to your safari. 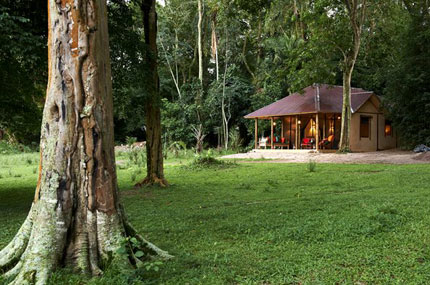 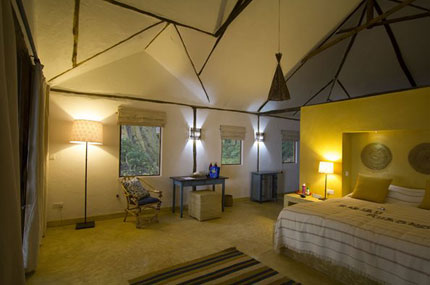 Chimpanzees and wildlife in the Rubondo Island National Park, Tanzania

Rubondo Island National Park, Tanzania, is one habitat of released chimpanzees (1). Other attempts to release chimpanzees have been made on the island of Gabon (2), Gambia (3), Liberia (4) and in a natural forest in Senegal (5). The chimpanzee population in Rubondo has grown successfully. However, details of its status are unknown, even among chimpanzee specialists. This report introduces the Rubondo chimpanzee projects that are now underway.

Rubondo Island National Park in Tanzania consists of 12 islands in Lake Victoria. The park covers a total area of 456.8 km2, and the lake is 1,134 m above sea level. The main island, Rubondo, is 26 km long and 3-10 km across. Its total area is about 240 km2. Rubondo Island is on a rift in the lake. It has no rivers and the soil is volcanic. There is a flat narrow isthmus in its center, one hill in the north, and four hills in the south. The highest peak in the south rises 351 m. The annual rainfall is about 1200 mm. There is a bimodal rainfall distribution, with peaks in December and April-May during the October-May rainy season. The annual temperature is 19-26(C. Forest covers 80% of the island, and the remainder is swamp and savanna. Native mammals include bushbucks, sitatungas, hippos, vervet monkeys, genets, otters, cane rats, and mongooses (6). Rarer sightings include black and white colobus, genet, marsh mangoose, suni antelope and elephant. There are no large predators. The range of habitat (savannah and open woodland to dense forest and papyrus swamps), makes Rubondo a bird watchers paradise. Its population of over 400 species includes both water and forest species - either residents of East and Central Africa or migrants from Europe and South America. Frequently seen are fish eagle, martial eagle, Goliath heron, sacred ibis, saddle-billed stork, kingfisher, cuckoo, bee-eaters, sunbirds and many different water-fowl.

Rubondo Island became a game reserve in 1965, to provide a sanctuary for animals threatened with extermination, due to the efforts of Prof. Bernhard Grzimek of the Frankfurt Zoological Society (FZS). At the time, chimpanzees, elephants, giraffes, antelopes, suni, black-and-white colobuses, and black rhinos were released on the islands. Rubondo and the other 11 islands became a National Park in 1977.

Dr. M. Borner and Ms. P. Robinson provided the following information on released chimpanzees. Between 1966 and 1969, 7 male and 11 female (one died in transit) chimpanzees aged 4-12 years were bought to Rubondo Island from Europe, in four groups, by the FZS. The chimpanzees had been caught in the wild in Guinea, Ivory Coast, and Sierra Leone, and are thought to be Pan troglodytes verus. The chimpanzees had all spent between 3.5 months and nine years in captivity in German and Dutch zoos and circuses, under conditions that varied from good zoo conditions in the company of other chimpanzees, to inadequate cages or solitary confinement. Most of the animals were difficult, troublesome creatures, which attacked or bit keepers. Two males were shot soon after release, after attacking people living on the island. The chimpanzees were monitored infrequently and there is very little documentation on how they adapted in subsequent years. In 1968, the first two babies born on Rubondo were observed. In 1984, two females of the first generation were observed, and some of the original chimpanzees likely survived until quite recently. A female was observed stealing a blanket and wrapping it around herself in around 1998 (7), and a male was observed in store of tourist camp and drinking a bottle of alcohol after that (D. Ommaney, pers. com.).

The FZS and Tanzania National Park Service started a joint chimpanzee project in 1996 to develop chimpanzee viewing for tourists. Camps were built in the north and south of the island, and since then research assistants have been looking for and habituating chimpanzees in three blocks in the north and one in the south. The recent records of the FZS show that the monthly mean number of chimpanzees observed was 2.6-5.5 in 1997, 2.8-5.8 in 1998, and 2.4-5.9 in 1999, respectively (8,9).

I stayed in the park for two weeks, beginning on September 2nd, and walked all of the blocks except the most northern one. During my stay, I had two chances to encounter chimpanzees, but not directly. On September 4th, the assistants walking in front of me twice met an estrous female and a male. On September 7th, I heard three or four individual calls. The chimpanzees were very shy and I could not close within 100 m in either case. Dr. A. Pusey, who stayed at Rubondo for eight days in 1998, also failed to see chimpanzees (7). It is believed that the chimpanzees still avoid observers.