Zakouma National Park is a park of extremes and abundance - we encounter flocks of millions of red-billed quelea flying to roost, tens of thousands of waterbirds on dwindling pans and thousands of black-crowned cranes flying into the sunset. The big game is plentiful too. The park is the last stronghold of a thriving population of Kordofan giraffe. Roan Antelope, Tiang and a host of other somewhat unusual antelope species are common and the parks healthy Lion population live alongside large herds of Central African Savannah Buffalo. The uniqueness of a safari in Zakouma, is that you are in an untouched part of Africa that few other westerners have experienced.

The Ennedi desert is an adventure through remote and breathtaking landscapes that sums up our ethos and takes you to places that few western travellers have ever been. This part of the Sahara offers a vast collection of sandstone mountains sculpted by the wind and sand over millennia into stunning rock formations and arches. Here you can enter the land of the Tubu, one of Africa's most traditional and least known people, who live amongst a myriad of petroglyphs and rock paintings from generations before. 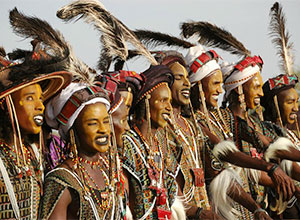