A day with the Great Whites

Day two of our three day expedition started early at the dock at 700am. The weather in Gainsbaai, South Africa was exceptionally mild for the end of the winter season. Seas fairly calm, bits of sun streaming through the orange glow of an incredible sunrise. We started this glorious day in optimistic anticipation as our first day brought 7 hours of deflated hopes and disappointment. Not one shark.

I prayed, wished, dreamed, cajoled and begged the Great White Shark souls to meet with us so we could honor the greatest of all predators of the sea!

We were rewarded with three very attentive and playful sharks. Nine of us had to flip a coin to determine which twosome would scramble first into the cage. As wonderful and exciting as it is to view the Great Whites topside, seeing them eye ball to eye ball underwater, as they methodically make their way to the bait is another story. I believe Al has me screaming on his underwater video camera as our shark glided slowly in front of our cage peering at us with those somber somewhat inert looking eyes. 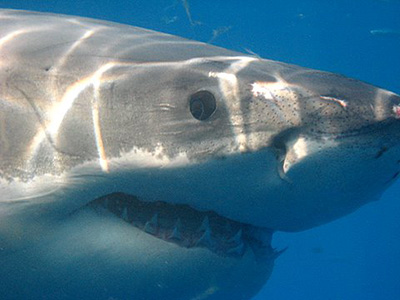 These gorgeous kings of the sea are not the merciless killing machines Hollywood has unfairly contrived them to be. These are very powerful, intelligent, timid and curious sharks, the top of the food chain. They have been unchanged for over 300 million years. They are perfectly designed machines.

Humans for all our worldly knowledge know next to nothing about them. They are protected in South Africa, shark nets in Durban however produce a kill of approximately 1800 sharks per year, 60 to 70 of them being Great White Sharks. With this senseless kill they have been able to study the sharks they catch in the nets. Autopsies have discovered several embryo's form at pregnancy as they grow in the females womb, the sharks will eat the unfertilized egg yolks enabling them to grow, also the strongest shark will eat his brothers and sisters, a rather gruesome fact of life. We do not know long gestation is, nor how often they reproduce. They are born approximately 4 feet long.

The day starts early, in good weather the boat ride takes 20 minutes from the harbor to Shark Alley, a narrow, shallow channel 15 to 25 ft deep lying between Dyer Island and Gyser Rock, 4.5 miles from shore. These small islands are covered literally with some 40,000 cape fur seals. One of Whitey's favorite foods. The crew promptly prepares the chum to attract the sharks. The recipe of the day includes several net bags brimming with cut up shark livers (more by-catch from the shark nets). A great oil slick is created streaming into the current to entice the sharks to follow the slick to the boat. They then tie a shark head and carcass as the bait to pull past the cages for the divers (another favorite meal of the Great Whites).

Two hours go by, conversation wanes, I am really speaking to the shark Gods now, please let us see a playful shark……. When all of a sudden the skipper screams "SHARK", lights camera, action! Excitement abounds camera's at the ready, there she is a beautiful 9ft Great White Shark! The first two divers frantically pulling on their wet suits, as luck would have our shark is staying around, a very good sign. Shark cage in the water, she's feisty trying to take the bait. Ion and Niko are the first in, father and son, Ion 20 years old, his eyes blazing! This is his dream and he cannot believe it! Water visibility about 10 to 15 feet. Luckily the shark and bait are very near the cage, I can nearly hear Ion squealing under water with excitement. The shark's face came right up to the cage to their amazement, as she turned, her pectoral fin entered the viewing space inside the cage!

I as tour leader would go last. However Debbie (a member of our group) decided she would not go in at the last minute and told me to take her place, so I did and ended up the second twosome in the cage, much to my delight! As I took Debbie's turn, her husband Al and I were amazed at the girth of this incredible creature before us. To see the jaws and power of a Great White Shark at eye level in all her glory is something that can only be witnessed under water. They are beautiful their markings all unique, as different as you and I. We ended up having two sharks come by as we were in our cage!

Our sharks stayed with us for a long time, all 8 divers were able to get in the cage twice! Mission accomplished! YES!

This was a day to remember!