The Best of Mauritania, 10 Days/9 Nights 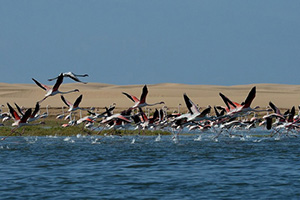 The Best of Mauritania

The unique itinerary in Mauritania with all the nights in comfortable hotels. 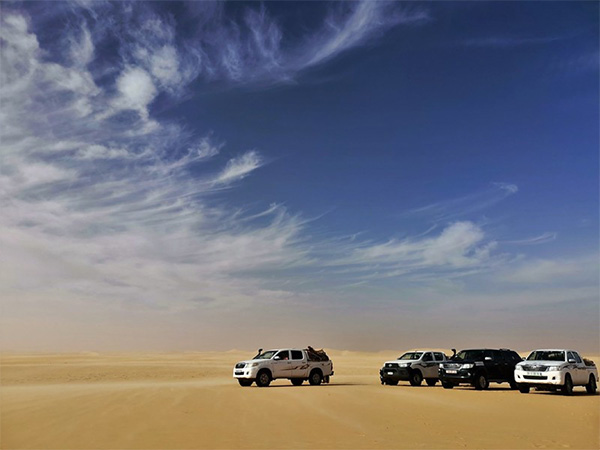 A new mild but intense expedition through Mauritania, a vanguard safe itinerary that joins real adventure during the day and a cozy hotel in the evening. The itinerary starts in Nouakchott, the capital, and continues to Banc d’Arguin, one of the three major migratory bird sanctuaries on earth, with two million of birds is the largest in Africa. On a shallow and calm Atlantic Ocean, sheltered by large sand banks, we will sail silently on a wooden local Felucca to the bird sites.

From the ocean to the mountains, finding our way through spectacular dune chains. In the Adrar massif, surrounded by yellow sand, crossing an absolute arid universe. We will discover lush oases hidden in canyons, gardens shaded by palm groves and typical conical grass roofs adobe villages.

Spend a whole day experiencing Chinguetti magical atmosphere, one of the best conserved oases in the whole Sahara. The ancient stone village date back to the XIII century, when Chinguetti was the seventh holiest city of Islam and main caravan centre. In the ancient quarter, the Ksar, stands a white stone mosque considered the second ancient, still operating, in the whole Islamic world, a remarkable example of Arab-Berber architecture. We will pay a visit at two main collections of manuscripts, stroll in traditional alleys and stone buildings. After dinner in our cosy guest house we will be invited to a local celebration: at dusk, around the fire, the silence of the desert will be interrupted by the rhythm of drums, women singing and dances.

Crossing of dunes to reach Ouadane. Founded in 1147, is the remotest oasis in Mauritania, the last outpost before the total emptiness… We will leave our convoy of 4x4 vehicles for a more traditional transport: riding camels, as the locals do, the less invasive way to join a remote nomadic camp and be invited to the traditional tea ceremony.

Beyond Ouadane, to discover the Guelb er Richât an enormous natural structure, called for his shape, the “Eye of Africa”. Composed by a dome surrounded by three concentrical rock rings, the largest with a diameter of 40 Km is a geological mystery. Recent theories explain it as the remains of a giant volcano.

The immensity of the Adrar mountains will welcomes us to “Fort Saganne”: an ideal movie set, not by chance chosen for the making of the homonymous film (Fort Saganne with Catherine Deneuve, Gerard Depardieu and Philippe Noiret, 1984). In the same area caves hide prehistoric paints, rock art from peoples living in these regions thousands of years ago, before the desertification.

In the shade of a narrow canyon we will follow a stream crossing a palm grove to discover Tergit, the oasis par excellence. Natural small pools filled by the slow and constant water dripping in caves covered with moss, the “green miracle” of a protected humid microclimate surrounded by the desert.

The expedition will end with Nouakchott fishing harbour, a spot of colorful black Africa at the southern edge of the Sahara: hundreds of wooden pirogues ready to the defy the Ocean, brave fishermen selling the catch of the day to the market … 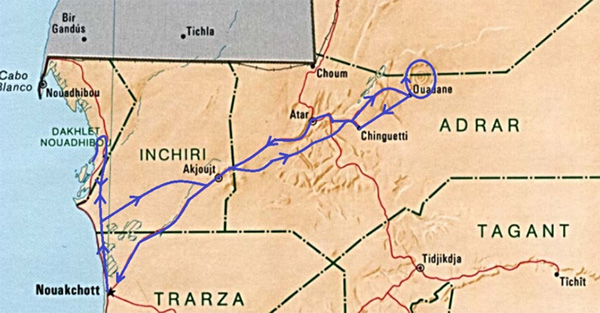 Arrival in Nouakchott and transfer to the hotel.

As introduction to the history and culture of the country, visit to the interesting National Museum which displays archeology, artifacts, costumes and textiles from prehistory to the present days. Unique the pictures taken during excavations of Aoudaghost, the northern trading town and better conserved site of the legendary Ghana Empire. Ghana was the oldest Empire and Kingdom known in Black Africa. Dated from the 6th century, the empire was located in the actual southern east of Mauritania. At that time from Aoudaghost, starts the caravan carrying gold to North Africa. Left Nouakchott we drive north along a spectacular road between dunes. We will leave the asphalt to find the tracks leading to the Banc d’Arguin.

Meals: B - L - D
Overnight: A Mauritanian style permanent camp will be our base for two nights. Large tents with carpets, beds, and electricity, located in a scenic environment facing the ocean.

Thanks to the mild climate, to a scarce human presence and to the rich fishy ocean, migratory birds winter here from Greenland, Siberia, Ireland, Scotland… making the largest water bird colony in the African continent.

Most of the day will be spent in an exciting sailing. On a wooden local felucca, between sand banks in the shallow ocean water we discover a multitude of birds. Return to our fix camp in Tafarit. 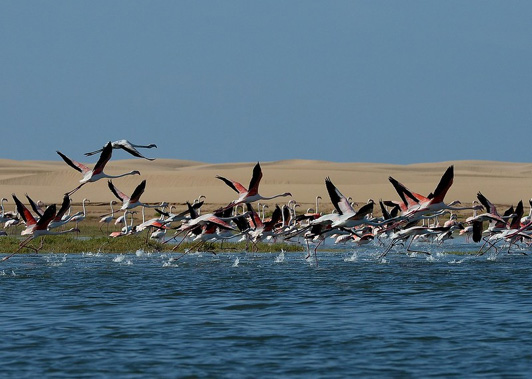 Early morning departure. Thanks to drivers experience we will make our own itinerary tracing an unmarked path in the sand of Inchiri region, a less known part of Mauritanian desert. To cross long ranges of dunes we will reduce the tire pressure. A land-navigation in an untouched geological universe. First, we will head north-east and then east to be able to run in the corridors aside the dunes lines. Camps of nomads with their camels will welcome us, showing that these immense spaces are not hostile to the life of human small groups. Evening arrival and overnight in Akjoujt.

Day 5: Dunes and Mountains, from Akjoujt to Chinguetti (off road in the Sahara – driving time 6 hrs)

Erg Amatlich is a vast dune basin trapped between the Adrar mountains. In addition to endless dunes, the region gathers a great variety of Saharan landscapes such as canyons, tiny cultivable oasis and palm groves. Discover prehistoric stone arrowheads, earthenware shards, silent witness of people living on these sites long time ago, when this region was a green land crossed by large rivers. Voices, joyful cries of women and children welcome us to remote nomadic camps and hidden adobe villages to experience intense human encounters after the immense silence of the Sahara.

Tifoujar Pass dominates a vast and steep gorge, remain of an ancient river ending in the Oued el Abiod or White Valley. Dune-filled fault line along which small settlements and palm groves are hidden. Arrival to Chinguetti at the cozy guest house that will be our base for two nights. 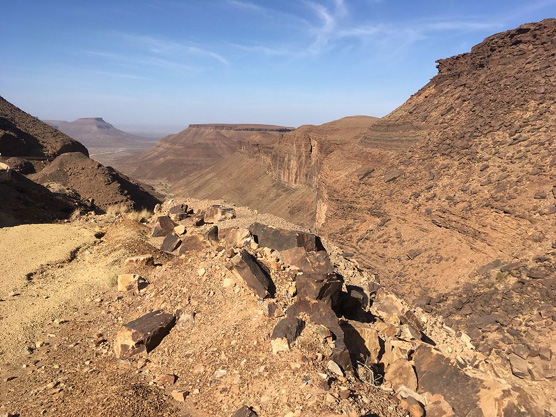 Chinguetti was an ancient caravan terminal and major trading point between north and sub-Saharan Africa.

The old village date back to the XIII century. Whole day in the magical atmosphere of this stone citadel, considered the jewel of Mauritanian oases, and one of the best preserved in the whole Sahara. Visit of two manuscript collections, including Ould Habott, the largest in Mauritania. The minaret of the white stone mosque is supposed to be the second oldest still in use in the whole Muslim world. We will discover the palm grove that shade vegetable gardens and the remains of the French colonial times as the former Foreign Legion fort , the tribunal and a tall water tower: interesting samples of Neo-Sudanese architecture. Sunset from the high dunes overlooking Chinguetti.

After dinner we will be guest at a festive celebration in a local courtyard. At the fire light, the atmosphere will become vibrant: roll of drums, songs of women and cadenced dances…

Return to our cozy guest house. 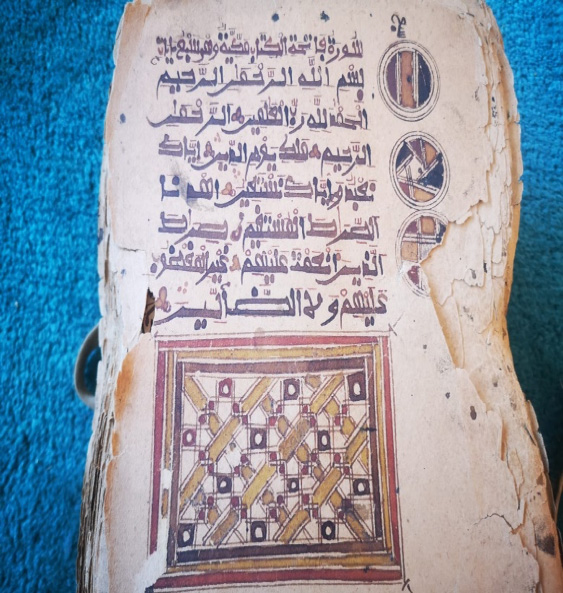 Day 7: Ouadane, the remotest, from Chinguetti to Ouadane (drive on virgin sands 100 km).

Departure for Ouadane in an absolute “out of any track” itinerary that follows the Ouadi (dry creek).

We reach the tiny oasis of Tanouchert: verdant vegetable gardens, Bedouin tents spread over sand dunes, palm trees… Ouadane, built on a rocky hill, is the remotest oasis of Mauritania, an outpost facing the immensity of the desert, was founded in 1147. Mainly in ruins, some of its stone houses are still inhabited. In the ancient days, Ouadane was an active caravan cross road.

Visit of the ancient stone town and the mosque recently restored. In the late afternoon, a camel raid to enjoy the silence of the desert and join a small nomadic camp, as locals do. The best way to be invited to the tea ceremony and experience the legendary hospitality of the nomadic tribes.

Arrive to the comfortable hotel that will be our base for two nights. 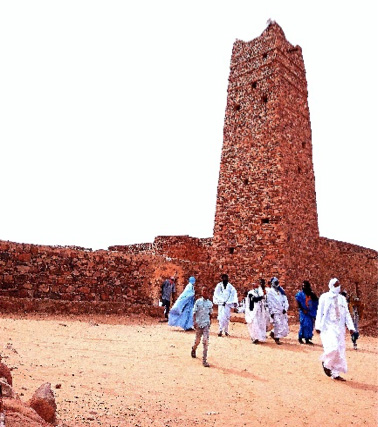 Day 8: Eye of Africa, from Ouadane to Guelb es Richat and back (desert drive, 90 Km).

Commerce in Ouadane region was so flourishing that in 1487 Portuguese built a fortified trading counter in the area. Today we visit what is believed to be the remains of this trade centre, called Agueidir.

We continue to Guelb er Richât, the “Eye of Africa”: the site, with its prominent circular shape has questioned scientists. Forty kilometres (25 mi) is the circumference of the largest of three concentric circles, with a dome in the centre. Most recent theory believes that it was a giant volcano collapsed and eroded. We will turn our gaze as far as our eyes can reach, feeling small facing this mysterious geological giant.

Return to our comfortable hotel in Ouadane.

Early departure for an intense day. The landscape never ceases to amaze us. Leaving the main track, we will reach a region of spectacular mountains, gorges and canyons. Infinite space dominated by the ochre of the earth and the blue sky. At the horizon we will see the ruins of Fort Saganne, built to set the namesake film: Fort Saganne.

The Agrour site, located at the top of the Amogjar pass, hide cave paintings featuring bovids, hunters and herders. Terjit, is one of the most particular and lush oases of Mauritania. After walking through a dense palm grove protected by a gorge and following a tiny stream, we discover a vast rock shelter where spring water flows. An unexpected atmosphere disconnected from time and from the harshness of the desert.

Arrival in Akjoujt in the evening.

From the desert to the ocean, from Sahara to black Africa. Hundreds of colorful pirogues resting on Nouakchott beach will leave us amazed. Our eyes, accustomed to sand and dunes, will be reflected in tumultuous waters, in which wind, waves, brightly painted pirogues and sub-Saharan (mainly Senegalese) fishermen selling the abundant catches to the market.

Mauritania processes more than 1,800,000 tons of fish each year.

Lunch in a trendy restaurant.

Arrival to our comfortable four stars hotel for the day-use rooms before the transfer to the airport.

Meals: B - L
Day Use: Hotel Azalai **** international standard. Transfer to the airport. End of our services. 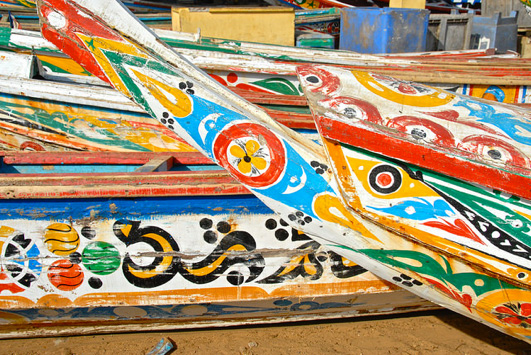