If the African Safari were personified, her home would be MalaMala...

’This is by far, bar none the largest holder of property and the best opportunity for serious photographers. The guiding and trackers are the best I have seen in Sabi Sand yet.’

MalaMala Game Reserve is the Safari Industrys blueprint to the luxury photographic safari. In existence since 1927, this massive thriving tract of land produces the most exciting wildlife experience this side of the equator. MalaMala Game Reserve is the largest private Big Five game reserve in South Africa . Comprising 13 300 ha, MalaMala shares a 19 km (12 mile) unfenced border with the world-renowned Kruger National Park and lies sandwiched between the National Park and the Sabi Sand Reserve.

For over four decades, Michael Rattray has remained focused on his objective to preserve and protect the land over which he is custodian. Allowing nature to move to its innate rhythm, guests experience today what the forefathers of the African Safari would have experienced at the turn of the century. This philosophy has paid off, as experienced by a veritable collection of photojournalists and film-makers who have made MalaMala their destination of choice to capture footage of wildlife viewing that would rival any Hollywood production for thrilling and breathtaking animal encounters.

MalaMala's Camps (MalaMala Main Camp, Sable Camp and Rattray's on MalaMala) are the embodiment of an authentic safari experience pioneered at a time when the safari was simple - unassuming camps, vast sweeping plains, the African sky and the bush in all its splendour. Wellness was the feeling after a long day in the wild. Cigars were shared without pomp and ceremony.

Guests to MalaMala will still spend hours beneath an inky sky in the traditional boma exchanging stories from the wild - a sumptuous meal, good company and relaxed faces warmed by the crackling fire, accompanied by the nocturnal symphony of sound. 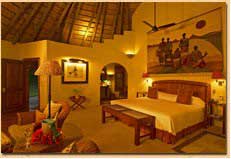 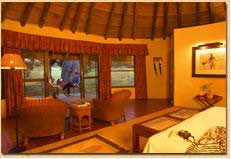 Every aspect of the Main Camp is designed to appreciate and enjoy the view of the surrounding wilds. Pathways wind their way along the perimeter of the camp to reveal individual ochre colored units tucked into the greenery which flanks the Sand River. Massive trees and rolling green lawns are filled with birdsong, with the occasional antelope or elephant which seeks the succulence of greenery.

The camp is unfenced - an oasis in the midst of the bushveld . 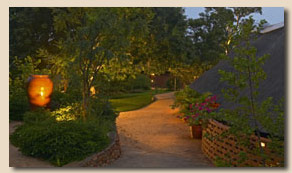 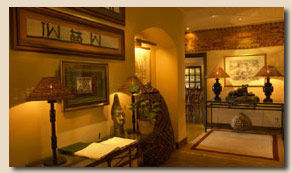 The total complement of 7 suites are furnished with every amenity, including "his" and "hers" bathrooms, 24 hour temperature control, mini bar, room safe and a private deck with magnificent panoramic views of the surrounding bush. The fully air-conditioned, beautifully appointed Sable Camp has a colonial feel enhanced with modern comforts.

A library with satellite television and internet connectivity give one the option to stay in touch with the world whilst the intimate safari bar, swimming pool and large wooden deck surrounding the camp provide the platform from which to admire the unimpeded views that make the Sable Camp experience so rich and interactive. 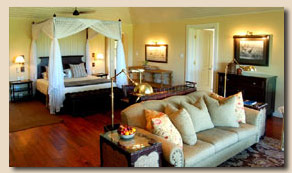 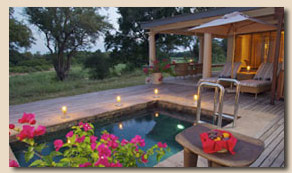 Rattray's on MalaMala offers a glimpse of an era long past when distant travelers to Africa married the magic of the wild with an elegance and refinement that have been immortalized in the epic tale of Karen Blixen in 'Out of Africa'. The epitome of regal colonial safari-style, the newest addition to the MalaMala portfolio is a culmination of over 40 years of experience within the Rattray Family.

Rattray's on MalaMala's bears the style of crystal and leather, with beautiful furnishings that are a treat to the connoisseur of the finer things in life, captured over generations on a land that remains as old as time.

Each suite or khaya (Zulu for "home") functions as an inclusive home, resplendent with hand-selected furnishings, lavish his-and-hers bathrooms, a secluded outdoor shower and a private heated plunge pool.