Uganda is as diverse as it is beautiful, with friendly people, cosmopolitan cities, political stability and a progressive eco-tourism community with grassroots projects to enhance the local lifestyle and curb the spread of disease, as well as protect wildlife habitats.

Uganda is where east African savannah meets west African jungle ~ exquisite landscapes ranging from lush green hillsides to dark forests abound with birds and primates, dormant volcanoes, large lakes and rivers and open grass plains populated by lion, leopard, elephant and antelope. Uganda is one of the few places in the world where you can have up close encounters with the majestic mountain gorilla.

A magnificent luxuriant swathe across the steep ridges of the Albertine Rife Valley, this ancient rainforest – one of the few in Africa to have flourished throughout the last Ice Age – is regarded to be one of the most biologically diverse forests in Africa.

Bwindi Impenetrable National Park has at least 90 mammal species, including 11 primates and is ranked as one of the best in Uganda for forest birding, with 23 highly localised Albertine Rift endemics. Bwindi Impenetrable National Park is renowned for it's Mountain Gorilla population, slightly more then half the world's mountain gorilla population is resident in Bwindi: an estimated 280 – 320 individuals living in 15 groups. Looking deep into the expressive brown eyes of these gentle giants is an extremely special privilege and an encounter unparalleled in most likely the whole of Africa.

There are 7 gorilla families in BINP that are habituated and open to trekking by tourists. In the Buhoma area there are the Mubare, Habinyanja and Rushegura family groups, in Ruhija there is the Bitukula and Oruzogo group and on the southern Kisoro side, and in the same area as Clouds Lodge, there are the Nkuringo, Mishaya and Nshongi family groups.

8 permits per gorilla family are available daily for tourists to trek and share in the lives of these amazing and endangered apes.

Bwindi Forest is home to a fantastic diversity of flora and fauna, including some exotic plants and rare and endangered animals. The forest was also home to an the Batwa pygmies. These indigenous people were the original dwellers of the anicient forest and were known as the 'keepers of the forest'. The Batwa lived in harmony with the forest and survived by hunting small game using bows and arrows and gathering plants for both food and medicinal purposes.

In 1992, the lives of the Batwa changed forever, when the forest became a national park and world heritage site in order to protect the endangered mountain gorillas that reside within its boundaries. The Batwa were evicted from the park and became conservation refugees in a world that was very unfamiliar to them. Their skills and means of subsistence were not useful in this modern environment and they began to suffer.

In 2001, when the Batwa tribe was on the edge of extinction American medical missionaries, Dr Scott and Carol Kellermanns came to their rescue. They purchased land and established programs to improve the conditions and lives of the Batwa. This included the building of a school, hospital and housing. The Kellermanns also developed water and sanitation projects and found ways that the Batwa could generate income and sustain themselves.

These projects are now managed and operated by the Batwa Development Program (BDP). BDP works closely with the Batwa community to try to ensure that their indigenous rights are respected and they also benefit from the forest being a national park and tourist attraction.

The Batwa cultural experience was created by the displaced Batwa pygmies to educate their children and to share their amzing heritage and traditions with the world. A day spent with the Batwa gives you the opportunity to enjoy the following:

Queen Elizabeth National Park resides in a fertile, equatorial area and has beautiful scenery. It is Uganda's most popular and accessible savannah reserve, with a total area of 1978km². It is primarily associated with grassy savannah plains, but this impressive park also includes within its boundaries, leafy rainforests, dense papyrus swamps and natural volcanic crater lakes. As a result it has one of the highest biodiversity ratings of any game reserve in the world, including a total of 95 recorded mammal species and more then 610 species of birds.

The Kazinga channel, with its varied range of animals and birds, has one of the worlds largest concentration of hippos and cuts through the park connecting Lake George to Lake Edward.

The Kyambura Gorge is home to habituated chimpanzees.

and is where memorable treks to visit these fascinating primates take place. Maramagambo Forest harbours an alluring variety of monkey species and birds and flocks of flamingos are resident on the crater lakes. While the remote plains of Ishasha in the southwest of Queen Elizabeth National Park are blessed with some enticing game-viewing areas as well as the most celebrated inhabitants; the tree-climbing lions.

Kibale Forest National Park is the most accessible of Ugandan's rain forests. It covers an area of 766 sq. meters, of which the dominant vegetation is lush and shady rainforest but is interspersed with patches of grassland and swamp.

This enchanting and exotic environment is home to at least 60 mammal species, remarkably 13 of which are primates. It also has a rich diversity of birds, with 335 species identified including the endemic Prirogrine's ground thrush.

The exploration under the shady, green canopy will brim with discoveries to delight botanists and butterfly lovers alike. The most alluring and rewarding activity in Kibale Forest is tracking for habituated chimps. The opportunity to gain a privileged and unforgettable insight into the daily lives of man's closet relatives is one which will be cherished and remembered for a number of years. 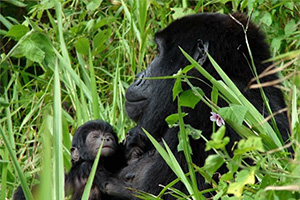 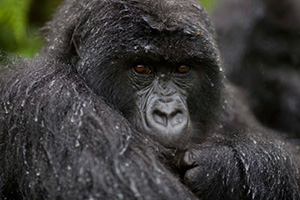 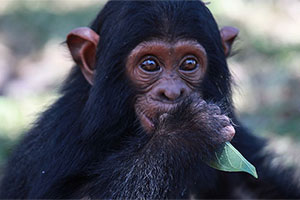 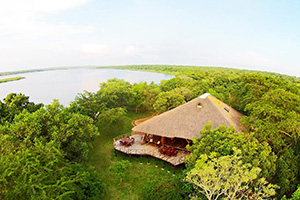 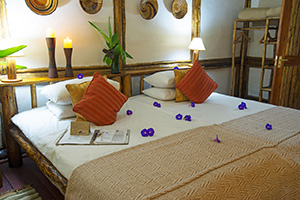 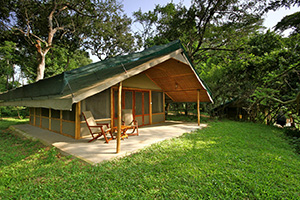