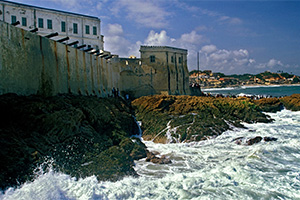 Finding your roots! This is a specialized itinerary focusing on the history of slavery and voodoo, considering that the last originated in Togo and Benin, brought to America by the slaves.

Therefore, we think that a trip aiming at discovering the roots must take voodoo in great account. The other focus is the Ashanti kingdom as the symbol of “African pride”. They were the ones who fought the colonizers with a tough resistance and today their origin makes them very proud Ashanti people.

Lastly, we included the city-life of Accra and Lomé. The former is particularly interesting.

Arrival in Cotonou and transfer to the hotel.

Meals: own arrangements
Overnight: Hotel du Lac (all rooms ensuite and with aircon)

We cross Lake Nokwe with a motorized boat to reach Ganvié, the largest and most beautiful African village on stilts. The approximately 25,000 inhabitants of the Tofinou ethnic group build their wooden huts on teak stilts. Fishing is their main activity. Ganvié has managed to preserve its traditions and environment despite the long-lasting human presence in a closed setting; and the lake is not over-fished. Daily life unfolds in the dugout canoes that adults and children row with ease using brightly coloured paddles. From these canoes, men fishing, women expose goods at the “floating market”, children go to school and play.

In the afternoon arrive in Ouidah. Ouidah was conquered by the Dahomey army in the XVIII cent and transformed into a terminal for the slaves’ trade. Today, the city is characterized by Afro-Portuguese architecture and the python temple is built face to face the Catholic Cathedral. The laid-back attitude of the locals mixes with the thunder of the distant waves on the beach and the rhythm of the drums creates an atmosphere outside of time, very well described by Bruce Chatwin in his book, "The Vice-Roi of Ouidah".

Walking down the streets we visit the python temple and the Portuguese fort, now transformed into a museum where the history of Ouidah and the transatlantic salve trade are displayed. We finish our tour by following the “slave route” to the “Gate of non-retour” by the beach where the slaves were shipped to the “new world”. 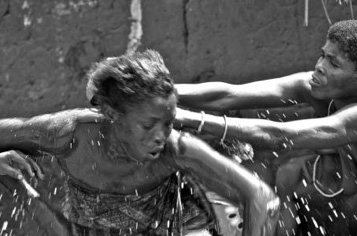 Voodoo has a long history. It developed in Togo and Benin and it was brought to America by the African slaves coming from the Gulf of Guinea. As time passed, Voodoo adapted to the new environment creating different rituals and beliefs. Nowadays, in cities like New Orleans people still practice Voodoo. Therefore, it is interesting to visit the land where Voodoo first developed and where so many people still believe and practice it.

In a remote hidden village, we will join a Voodoo ceremony: the frenetic rhythm of the drums and the chants of the adepts’ help calling in the voodoo spirit who then takes possession of some of the dancers. They fall into a deep trance: eyes rolling back, grimaces, convulsions, insensitivity to fire or pain. Sakpata, Heviesso, Mami Water are just some of the voodoos divinities who can show up. In this narrow village, surrounded by the magic atmosphere of the ceremony, we will finally understand what people mean when they say: “In your Churches you pray God; in our voodoo shrine we become God!”

Then we will meet a traditional healer who treats his patients with voodoo rites and herbs. The treatments are effective for almost all diseases, especially for insanity. His shrine is impressive. The endless list of voodoos shows the endless powers concentrated in the site.

Drive and overnight in Lomé.

Lomé, the vibrant capital of Togo, is the only African city which was a colony of the Germans, the British and the French. It is also one of the few capitals in the world bordering with another nation. These elements have led to the development of a unique identity reflected in the life style of its inhabitants and in the architecture of the town: Lomé is indeed a cross point for people, trade and cultures, a cosmopolitan city in small size. We will visit: the central market with its famous “Nana Benz”, women who control the market of the expensive “pagne” (=cloths) coming from Europe and sold all over West Africa; the colonial buildings in the administrative quarter where the flavour of colonial time is still very present. In order to complete our understanding of Voodoo, we will make a stop at the fetish market where we will be explained the curative power of voodoo and where we can find an eclectic assortment of all the necessary ingredients for love potions and magical concoctions.

Drive and overnight in Accra. 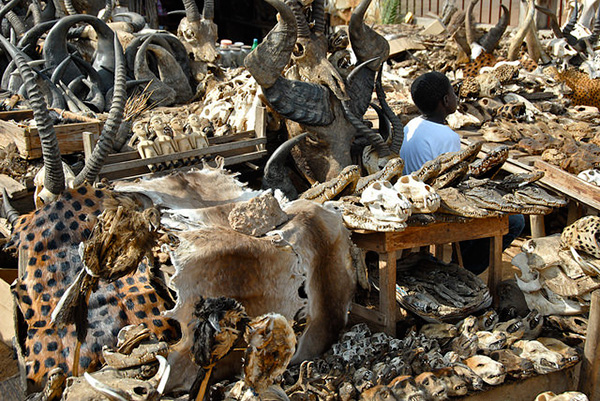 Waking up in Accra can be quite a shock after having spent the previous day in Lomé. The former is indeed a metropolis going through a fast development. Skyscrapers and modern buildings shape the financial quarter where ladies and gentlemen walk down the streets in nice suites. This quarter vanishes into the first settlement of Accra: the quarter of James Town, inhabited by the local population known as the Ga. Our visit includes the visit of James Town, among other things we will visit the former slave prisons of Ussher Fort and James Fort. Two of the many European forts built along the Ghanaian coast, these military posts were used to store commodities and to hold West African slaves before they were shipped overseas. At Ussher Fort, head inside the museum that charts Ghana’s slave trade with poignant artefacts and displays. If possible, we will see the National Museum (now under renovation), one of the first works of independent Ghana - the idea inspiring the Museum is to relate Ghanaian art to the rest of the continent and to prove the existence of an African history as part of the general history of humanity.

Our tour ends with the visit of a workshop where they specialize in building fantasy coffins. These special handcrafted coffins can reflect any shape: fruits, animals, fish, cars, airplanes…. the only limit being imagination! Started in Africa, these flamboyant coffin designs are by now collected worldwide and exposed in museums. 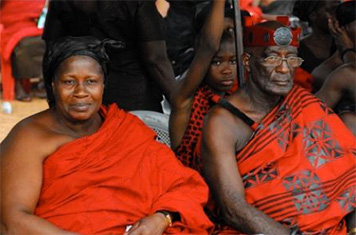 Today is a transfer day. We will reach Kumasi, the capital of the Ashanti kingdom.

In the afternoon we attend- if available- a traditional Ashanti funeral attended by mourners wearing beautifully red or black togas. We say “funerals” but in fact we mean a “festive” celebration: the deceased is considered being still present in his family. The relatives and friends gather, socialize and celebrate his memory. The chief arrives surrounded by his court in the shade of large umbrellas as drums give rhythm to the dancers whose intricate moves are highly symbolic.

Kumasi is the historical and spiritual capital of the old Ashanti Kingdom. The Ashanti people were one of the most powerful nations in Africa until the end of the 19th century, when the British annexed the Ashanti country to their Gold Coast colony.

One cannot visit Kumasi and the Golden Ashanti kingdom without meeting one of its many traditional chiefs! We are privileged to be allowed into the courtyard of a great Ashanti chief. Wrapped in traditional cloth and adorned with antique solid gold jewels, he will take a seat under a large coloured umbrella and discuss his role as a traditional chief in modern Ghana. On the agenda is a visit to the Ashanti Cultural Centre, which has a rich collection of Ashanti artefacts housed in a wonderful reproduction of an Ashanti house.

Today with nearly one million inhabitants, Kumasi is a sprawling city with a fantastic central market, one of the biggest in Africa. Every kind of Ashanti craft (leather goods, pottery, Kente cloth) is found here, along with just about every kind of tropical fruit and vegetable. We will end the tour by visiting the central market.

We will leave Kumasi to reach Elmina. Here we will visit Elmina Fort, the oldest European building in Africa, erected by the Portuguese in the 15th century. At different times the castle has been used as a warehouse to trade gold, ivory, and eventually slaves. The castle we visit today is the result of successive extension works and is recognized as a UNESCO World Heritage site. The old Dutch Cemetery in Elmina goes back to 1806. Outside the castle, a spectacular fishing village with lots of large colourful fishing boats - every day these wooden large pirogues conducted by skilled fishermen across strong ocean waves and currents, “fighting” to earn a living. In the old town we will see the Posuban, the shrines of the ancient “Asafo companies” - the warriors who used to put their offerings on the large colourful statues. The alleys in the old town have a very lively atmosphere, bringing us back to a time when Elmina was a busy colonial town. 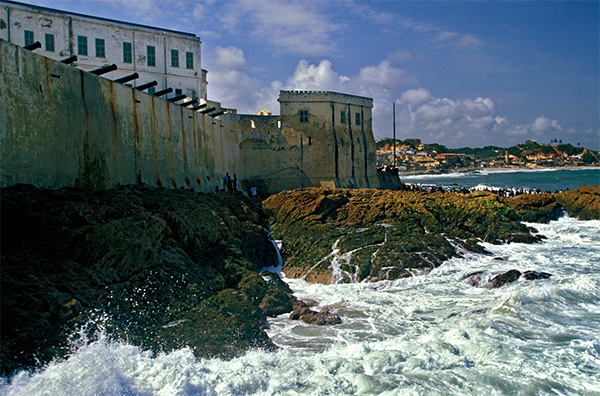 We end our journey on the history of transatlantic slavery with an excursion to Cape Coast. Cape Coast is one of about forty UNESCO heritage “slaves castles” built on the Gold Coast of West Africa (now Ghana) by European traders. It was originally built by the Swedes for trade in timber and gold, but later used in the trans-Altlantic slave trade. The castles were used to hold salves before they were loaded onto ships and sold in the Americans, especially the Carribean. This “gate of no return” was the last stop vefore crossing the Altlantic Ocean.

In the afternoon we will visit Kakum National Park, a few kilometres north of the coast, in the middle of the rainforest. This park gives us a great opportunity to observe the forest from above as Kakum has a canopy walk hang high up in trees. The Kakum canopy walkway is the longest and highest rope bridge in the world. Walking between 120 and 150 feet above the ground, we will enjoy an incredible view of the rain forest. At this height instead of revealing their trunks, the trees offer a breath-taking view of their canopies and look as if they were trying to touch the sun and the sky above.

We can enjoy some relax on the beach before leaving the coast to head back to Accra. Rooms in day-use for the last shower and transfer to the airport.

End of the services.

Meals: B - L
Overnight: Rooms in day-use at Urbano Hotel (all rooms ensuite with aircon)